My next podcast interview is with author Dick Khan, who documented his DMT experience. In the spirit of reaching into the unknown, I had a few truffles a few weeks ago. This description is my honest account of the experience.

I live in a part of the world where the fairies play. But what transgressed this past year, the shut down of society, the severing of communication, and lack of engaging in new adventures, my spiritual juice was harder to find than toilet paper in March 2020.

I have wanderlust. We were planning a trip to Thailand and Vietnam for Christmas. I can’t even jump on a plane and visit my family across the pond. It isn’t that simple anymore. I have reduced my daily recreational activities to drinking a bottle of red wine every night, two on weekends.

You’re probably a little surprised. A person who advocates clean living and posts about how to keep good mental health, drinking an absurd amount of alcohol? I am only human. And a very flawed one. I will never pretend to be that California woke who wakes up at 5 a.m. to do yoga and drink the latest vegan smoothie. More power to you if you do. You’re many steps ahead of me.

I digress. It was time to engage with the spirits. But I don’t have the knowledge to brew ayahuasca. The closest was to try something new and not illegal where I live. I have heard people talk about psilocybin, aka magic mushrooms. I said to myself, okay, I’ll give it a try. It can’t be as strong as Aya.

Prepping for the journey

I had a minder, in case anything went tits up. Because I don’t have access to a quiet remote location at the moment, I had to close off my bedroom and create a sacred space. This, in the middle of the gloomiest city in Europe.

I had 25 grams of truffles, so, yes, I was in this to go deep. I wasn’t afraid because I have done Aya several times and that is supposed to be one of the most powerful psychedelic plant medicines in the world.

I took my truffles, which tasted like a tree’s arsehole, and waited for the magic to happen. Thirty minutes in, I start to drift off into the other world. I put on an eye mask and my headphones. I decide on ‘OM chants’. An androgynous voice sings in my ear. Lights off, incense lit, I pull the covers over me and invite them to play. And they absolutely do.

Eyes closed and covered. Music entering my into my sub conscience. The chants take me to a sort of predestination. Maybe you have read about or experienced these psychedelics before. It’s not at all easy to describe what the mind is doing. That’s why so many equate it to a spiritual experience. The feeling is absolute immersion. It’s not like dreaming. And I am not a master meditator to get in that deep during sessions.

I was in it. Every time I had a strong emotion or thought of someone I love, I would build and create. I had to get rid of the chants. It was too strong. Too deep. So I opened my eyes and removed the cover to change the music to classical. I was also thirsty so I drank some water. And I noticed the colours and entities in the room. I have heard the term ‘machine elves‘ and it was something like that. Strange little things dancing around in fluorescent colours.

It freaked me out a bit so I turned the music quickly and went back. This time, the music of Mozart, Mawe, Beethoven and other masters participated in this creating of things that are absolutely hard to describe and not of this world, or at least, not the human world. The wondrous thing is that the music was alive. I know people say that when they listen with human ears. But, no, it was part of this machine elf world, an extension of my imagination.

Every song set its own stage, and I started to communicate with Them. Them are the entities that surround me. I recognise Them as my Spirit guides. But it’s so different from Aya. Aya is question and answer. With Aya, I could see the faces, codes and messages that were clearer. The truffles were more fractal and lightning-fast. It was more steered by my emotions. It was like I was creating with my heart, whereas Aya felt more in my mind.

The best part was a few hours in. I had to get up to use the toilet. I felt light-headed, so my minder walked me to the bathroom. I asked him to turn off all the lights, because my eyes were sensitive. I could see in the dark; the elves were illuminating my path. I got to the toilet to pee and immediately the sound of the liquid hitting the water put me in hysterics. I was bold cackling.

‘Are you okay? What are you laughing at?’

Only I could understand the hilarity of the sound of my urine and the elves lauging and dancing in the darkness.

I walked back to the bed and drank some more water. The water had things in it. Little shapes swirling around. It was alive too! Everything had a beat. Back into the feel good zone and as soon as I closed my eyes, they all came back but with more intensity. This time Vivaldi was playing ‘Four Seasons’ and taking me to places that felt familiar but I had forgotten.

The house that Love built

Not like Aya, but I still asked them questions and was shown what I needed to know in a different way. I asked them about certain members of my family. Each time, I asked about a person with my heart and was shown the most striking and impossible places. I kept thinking ‘this is them…this is where they live.’ And the only way I can explain it is, we are spirits living in our human forms, but we also live in many places, different dimensions.

I made ‘houses’ for each of them. With the music, I created sacred places for them to dwell in.

I was in complete awe and grateful that I was offered these gifts of visions. I don’t say ‘thank you’ enough to the universe. Yes, the world feels so bad right now. We are imprisoned. There are dark forces dictating our human lives. They want to crush us so that we become slaves to their material world. They want us to forget the beauty, the spirituality and the memory of where we come from.

I was shown, and have been shown previously, the truth. What we have to remember is the Source. No, not some angry god spiting us from above in an ivory tower, but the thing we cannot imagine. The Source which is pure love, forgiveness, perfection. And that Source exists in us. It is more powerful than all the politicians, religious leaders, celebrities and dictators that threaten us or try to manipulate us.

You don’t have to eat truffles, or mushrooms or smoke DMT to get there. Not everyone is ready to take that journey. The key is to become Gnostic. For me, it was a nudge. It was a push to seek knowledge, question everything, and destroy the worry that I have always carried in my soul. The lesson sounds infantile, but it will always be the truth. The answer is LOVE. With love comes trust, understanding, high vibrations, healing, intelligence, creativity, and I can go on. That’s the message. Love. Surrender.

*Please note that psilocybin is illegal to buy or consume in many countries around the world. Anyone wanting to engage should investigate the laws in their country and seek health advice from a medical professional, as some medications and health conditions can have adverse effects. 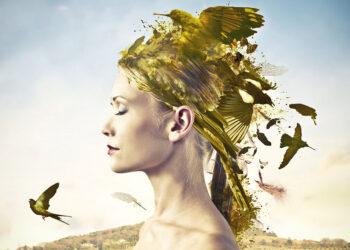